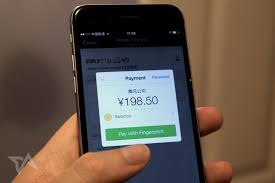 Just finishing a three week trip to China, and one major change I’ve seen on this trip is the use of mobile payment. Even from my last trip about 6 months ago, it seems that everywhere now takes mobile payment.

There are two major platforms, WeChat Pay and AliPay. WeChat pay is built directly into WeChat, which started as a messaging app like WhatsApp but has extended into a platform. AliPay has been around for a while and pretty much was PayPal. So for WeChat Pay you just use WeChat while AliPay has its own app. I’ve only used WeChat pay but see both as I traveled around.

I’ve only used Wechat pay, and with that if your at a store, usually they’ll ring you up and you show them your QR code, they scan it and you see the amount in WeChat and type in your password to accept. Another way that happens more when its someones “personal” account, is for the person paying to scan the QR code of who they want to pay, enter the amount and password and payment goes through. From the person paying, it all works with existing devices, and from the store/person it can just be with their own phone or may require some additional setup (usually for larger stores, that don’t just use one account).

The difference between WeChat Pay or AliPay platforms and Apple Pay or Samsung Pay is that they work on any phone. Instead of using NFC, its an App and a QR code. The Store/Person getting paid can just your their phone, or it can be added to the POS system. When I do use Apple Pay in the US, it is faster then WeChat pay, but the problem is that most places don’t take it or don’t even know they take it.

What was interesting, on my trip to China, everywhere I went now seemed to accept WeChat Pay. The little corner store/restaurant that only took cash before, to the big grocery store. In China, most little purchases needed cash before, but now everywhere seems to take WeChat Pay. It means that I don’t need to carry change to buy small things, and really don’t even need my credit card.

I’m not 100% sure on the fee’s for those getting money. As with most systems, the person paying doesn’t get charged, but from what I’ve been told there is very little cost for the business/person receiving money. I believe if the money stays in the platform, then it doesn’t cost anything, and only withdrawing it to a bank account has a small fee (1% or less). That maybe the reason that mobile payment has grown so fast, as you don’t have to deal with cash that can go missing and you’re not paying anything or much to use it. Only cost maybe to setup with a POS at a bigger store, but if only a small one then all you need is the bosses WeChat. It will be interesting if the fee structure changes, and how that will impact the usage, but once customers get use to it, it maybe hard to say no.

Hope you found this quick update interesting, and if you’ve used AliPay or WeChat Pay what are your thoughts? Leave some comments below.